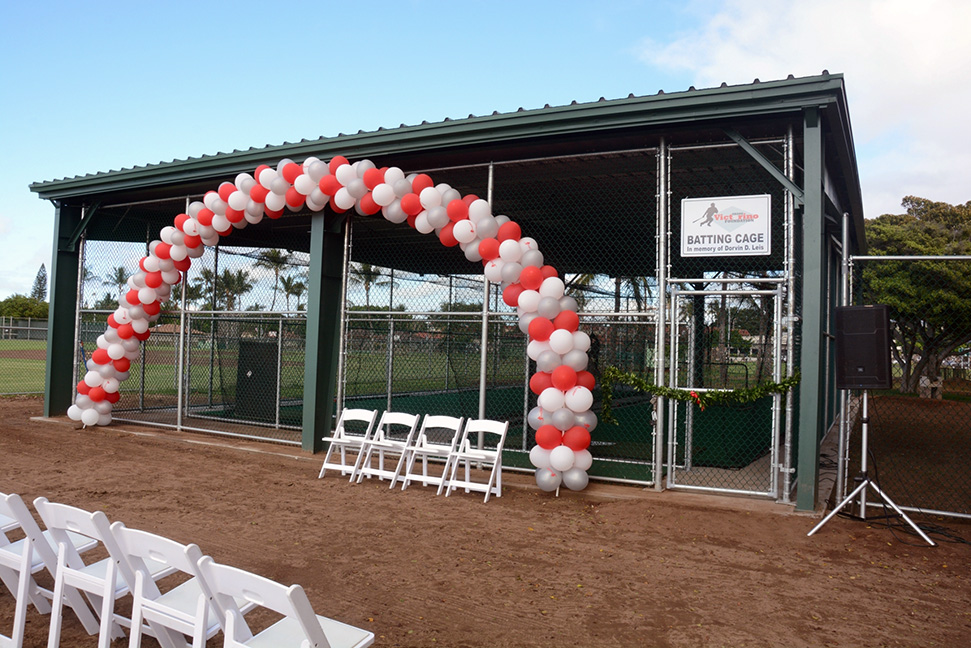 “I am extremely thankful to Tommy Bahama, Andaz Maui, Wailea Golf and our sponsors, partners and volunteers for joining my Foundation’s efforts to impact underserved children across the state,” said Victorino,

“It’s an honor to be able to give back to the community here and the new batting cage is a perfect example of what can be accomplished when people come together to change the lives of keiki in need,” he said. The golf competition was held at the Wailea Golf Club’s Gold Course and was immediately followed with a reception, auction and dinner at the Andaz Maui Ballroom.  Sponsorships for the private event ranged from $3,300 to $16,500 for golf opportunities. Teams of four were joined by celebrity team captains to compete for the championship and to win signed memorabilia and other prizes. All funds raised from the event solely benefit initiatives in the state which further the Foundation’s mission to provide opportunities to underserved youth. Proceeds go towards programs like the annual Youth Baseball Clinic (a free event for approximately 80 children) and projects like the construction of a batting cage in Kīhei, Maui, as part of Victorino’s long-term goal of improving youth baseball fields throughout the state.

On Monday, Nov. 23, Victorino hosted a dedication ceremony of the Shane Victorino Foundation Batting Cage at Kalama Park in South Maui. Remarks from Mayor Alan Arakawa and Councilmember Mike Victorino (Shane’s dad) as well as Shane himself, were followed by a traditional Hawaiian blessing.

The cost of the project was estimated at nearly $100,000, and was funded by the Shane Victorino Foundation. Community partners included project manager Ed Roybal and Goodfellow Bros., Stephen Leis and Dorvin D. Leis, Inc., architect Steven Heller, the County of Maui and Kīhei Little League. Other in-kind donations were provided by a number of local businesses and individuals.

Participants learned fundamentals of the sport and hit in the newly unveiled batting cage. Shane spoke about the importance of working hard, both on and off the field, and held a brief Q&A with the children. Clinic sponsors Enterprise Rent-A-Car, Office Depot OfficeMax, Zippy’s and King’s Hawaiian also contributed to the event.

The Celebrity Golf Tournament was presented by sponsor Tommy Bahama, Wailea Golf Club and the Andaz Maui at Wailea Resort.